7 Non-Dating Scam Stories that Will Amaze You

Surely you read about jump4love scam or other dating scams. But we also have other schemes of fraud, which have nothing to do with the dating of subjects. And let the jump4love scammers do not think that this is respite for them. We will definitely write one more revealing material.

Fraud on the Internet is becoming more sophisticated every year. And if some 5-10 years ago the most popular way to deceive the user were the so-called "Nigerian letters", but now this kind of fraud has long descended near the end of the list. The world evolves, along with it the Internet develops, skills of swindlers are improved and the quantity of deceived people grows.

Here is one of the most common facts about scams: Very often on the Internet, people relax and forget that all the schemes of scams that exist in it have already been tested by fraudsters in real life. Mythical "freebie" does not exist. Money is not taken "out of nowhere", even if the "small rich" will send a very small amount to the next "magic wallet". Today we will present you the top schemes for cheating gullible Internet users. Remember about them and do not let the attackers deceive you. 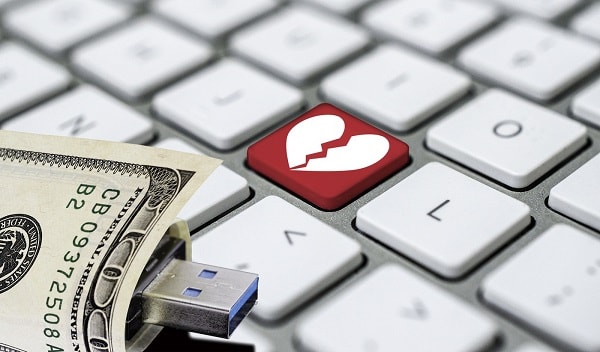 The so-called "clones" of online stores recently acquired huge popularity . When meeting with such a scheme, it is most difficult for the user to define a scam, and scammers receive the most "easy" and "legal" money.

A group of individuals creates a copy of the site of a well-known online store, most often a large offline trading network, which already has a certain positive reputation. They register a firm to work with bank accounts and begin to "sell" the goods. By means of competently constructed fraud, the site very quickly falls into the top of the search engine yield and begins to generate revenue. Naturally, customers of this site do not receive any goods. And real trading networks have to spend a lot of time and money on resuscitation of their reputation. It is worth noting that it is a very simple scheme, which even beginner scammers can cope with. That's why it is very popular. Despite the fact that Internet security services quickly identify clones, they manage to deceive a huge number of people in a few days. It is almost impossible to return your money , in some cases you can receive compensation from the original store, if it really values ​​its reputation.

The main purpose of this type of Internet fraud is to get access to your bank card. Today, this is the most common type of fraud, for which all possible means are used. One of the most common versions of phishing is the sending of emails on behalf of the bank with a confirmation of a change in the security system or notification of a hacking account. These letters contain a link to a fake site that accurately copies the site of the alleged bank. After that, already on the site, the user is asked to specify the pin-code and the data contained on the card.

In this case, most often, the scheme does not imply an urgent withdrawal of money from your account. But just in a couple of days, the attackers may have a duplicate of your card and all your savings. The strangest thing is that banks constantly repeat that none of their services and no employees will NEVER request a PIN-code from the client. But people still believe, report personal data, and then blame the bank for an inadequate security system. So we'll remind you too - keep the cherished pin numbers in the most reliable place that you can imagine. Best of all - in your head.

Begging on the Internet is extremely developed. There are millions of requests for help to the "poor dying child", "soldier who lost both legs", "a student suffering from cancer", "a kitten who has nowhere to live," and other compassionate internet scam stories. All that you can imagine, anything that can touch your heart has already been invented by scammers.

Most often this scheme is bribed by the presence of all necessary documents that confirm the fact of illness, recall of friends and acquaintances and other accompanying information. However, if you approach the verification of data more carefully - it may be that the person in the photo has long since died, or worse, the fraudsters simply changed the bank details in the very form of the request for help. If you are one of those people who can not help lending a helping hand, be very careful. Ask the applicant to provide photocopies of documents indicating a problem (for example, if a person needs expensive treatment) and any documentation that is possible in a particular case. If you know that you can help not financially, but a concrete matter, never choose money. If a person in need refuses, then most likely you are dealing with a fraudster. If you only knew how many people enjoy using your sense of compassion with pleasure to get material benefits in a dishonest way.

Also quite common type of internet scam is still registered scripts blocking access to the browser. This is quite primitive, but strangely enough - an effective way.

Its essence lies in the fact that the most concise and strict design is chosen for the "blocking" of the blocking message, targeting and localization of the user's IP with the posted text about the blocking of the user's computer because of the use of prohibited content. In this text the text of the relevant legislation and a number of numbers for making payments for the "unlocking" of the system are indicated. It's easy to guess that the main victims of such fraud are visitors to porn sites. Thus, almost all men fall into the category of risk. Poor men.

One of the most malicious viruses, developed and implemented by cybercriminals on the Internet, was Trojan. Encoder, which received the nickname "data killer". This program-extortion is distributed through sites with built-in malicious code by hidden downloading to the user's computer. It automatically encrypts all files hosted on the user's computer, and then quickly self-destruct. When you try to open any of the files on the screen, a message appears asking you to pay $ 10 to $ 99 (most often with sms) for the ability to decrypt the information. Pay attention that this is one of the most dangerous scams on the internet.

"The Kidnapper of Social Networks"

The essence of this virus is that it redirects the user from the page of the requested resource to a fictitious, copied from the original. By typing the address of one of the popular resources on the "infected" computer, the user gets to the server-substitution, where he is offered a login page, almost identical to the real one. Since the correct name is given in the address bar, and the appearance is copied from the original server, most users do not suspect the authenticity of the page. After entering the name and password, there is already another page showing the need to "confirm" or "activate" the account with sms to a short number, the cost of which is either minimal or free.

Thus, attackers not only receive "dirty" money from subscribers, but also get the user's login and password to the specified popular resources, which allows them to further distribute their malicious program on behalf of the victim. In addition, this method of hacking accounts is used for blackmail. Attackers get access to your personal correspondence and then the fun begins. After all, each of us has his own "skeletons in the closet"!

The essence of this scam is simple as a stone and just as effective. Sooner or later you will receive a letter written in a very polite, though not very literate language, notifying that you and only you were the only one (and more often - one of the candidates) who will receive the legacy of a dying lonely billionaire from sunny Nigeria, Australia, the Emirates and other "golden" countries. To obtain an inheritance, you only need to send a certain package of documents back by e-mail.

Here scammers play on each person's secret dream of "childless aunt-billionaire" somewhere abroad. And, unfortunately, such letters find a response in the hearts of Internet users so far.

We hope that our article has been useful to you. Remember that the Internet is not a deceptive zone, but a space where scammers thrive. Want more details and interesting fraud scams stories? Faced a j4l scam? Do you want to learn how to deal with the scammers? Welcome to the j4l.com - they know how to treat this disease!